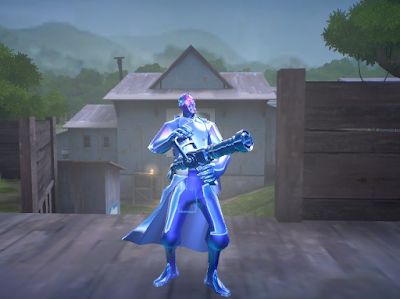 At this point, I have so far sunk many, many hours in Team Fortress 2, a team-based shooter game I started to really enjoy playing since 2015.

While I can earn a few dominations and topscore on the Valve public servers nowadays, it sure wasn’t like that when I first started out. As a matter of fact, in the very first game I ever played, I did so poorly, I nearly quit the game altogether. (I talk a little bit about my experience in that first game in another article.)

So what did I do to git gud? I did what most people would do, of course. I started playing rounds as one of the so-called most complex characters to play in the game. I started to play as Medic.

In general, Medic is known as a very important class in TF2, whether in pubs or in competitive. As Medic, it is generally known that your duties include being a walking health pack, offering yourself as a sacrificial lamb to Snipers, Spies, and Scouts (to protect your other teammates, of course), and dishing out Ubers to teammates who suddenly forget how to move the moment you right-click.

Kidding aside, being a Medic is more than just healing hurt teammates and making them shiny. As a pub Med, for example, you have to take tabs of your teammates’ health, make sure you’re out of Sniper sight lines, have good environmental awareness, remember to overheal your Scouts, kill the Spy before he takes down your pocket, and do countless other little things to essentially keep your team alive.

Thus, having a good Medic can very well change the tide of the game. As such, many pub players tend to pray to the Lord GabeN for the blessing of a legendary Medic who would pocket them to victory. GabeN bless their souls, they got me instead.

But I have to admit that starting out as the medicinal man actually helped me improve my game, get my groove, and enjoy the time I’ve spent in TF2. Here are a few reasons why.

I Was Credit To Team, Despite Being A Newb

One of the first things I learned about the Medic was that he has a unique Medigun, which gives you the power to heal your teammates when they’re at low health, overheal them when they’re fully healed, or pop a shield of invulnerability for both you and your patient at the most opportune moments.

(It also means that people immediately blame you when they die, whether or not you’ve helped them. Note: That ingratitude is clearly stated in the contract all Medics sign in blood.)

Of course, as a newbie, I didn’t know much of the mechanics of the game, so all I did was heal people who needed the health. To be honest, I didn’t even know how Ubers worked back then, so I actually got quite a fright when I accidentally hit right-click the first few times. Nevertheless, I learned that as long as I was healing my teammates, they generally didn’t complain, and even threw in a “Thanks!” every now and then.

Eventually, I learned what Ubers were for, and figured out how to use them to my team’s advantage. Also, since I just had to follow people around to heal them, I learned the layout of the maps and how to position myself better when healing someone.

Best of all, I learned how important Medics were to a team. So, when I choose another class to play and see a Medic on my team, I try my best to take care of our Medic the way I’d like to be taken care of as a Medic, too. Win-win, overall.

I Learned About Class Roles

Being a Medic means that you’re usually behind your teammates most of the time, healing them instead of fighting in the frontlines. After all, your primary function is to keep everyone nicely healed so they can kill the baddies while you grant them the will to live.

That also means that I had a good front view of how classes worked. I was totally new to TF2 then, and I didn’t have prior experience from Team Fortress Classic nor from any other MMOFPS, for that matter. The current class tutorials also did little to teach me how all the classes work, so as a new player, it was daunting to have to know what all 9 classes could do.

So, by putting on a Med frock, I could pocket a class and see how they operate in-game. I learned that Soldiers can do insane rocket jumps, that Heavies are really vulnerable despite being tanks, that Scouts hardly stand still, and that Pyros are great Spycheckers.

And I learned all this just by seeing other people play the game as it should be played. It’s kind of like being a mad scientist watching some specimens kill each other over and over again. Which is the point of playing Medic, I suppose.

I Was Forced To Improve On Game Sense Quicker

As mentioned earlier, having a good Medic can make or break a team, especially since a timely Uber can decimate the enemy and provide enough distraction to make a victorious push. Consequently, this means that if you’re a Medic, the enemy team has probably placed you on the top of their priority kill list.

And it didn’t matter if I was a fumbling new player in the TF2 sphere. As soon as an enemy got a glimpse of that white coat, they immediately preceded to attack me with all they’ve got, even if I was surrounded by my teammates. Since I was playing in pubs, installed the game for the first time, and was essentially at the mercy of everyone else, I got REKT so hard several times and in so many ways.

It was disheartening to feel the ire of the enemy team on me all the time, but it also forced me to improve on my game sense very quickly. (According to Urban Dictionary, game sense is “a term coined by the gaming community to describe a player’s prediction and deductive reasoning abilities”.)

I immediately had to know if the teammate I was healing was a spy, else I would end up with a knife in my back. I also learned to look around in all directions, not just tunnel-visioning forward, since I never knew when a Soldier would bomb market-garden me. With all these threats, I learned to dance around like a prima ballerina on the battlefield, while keeping that Medigun beam steady on my teammates.

Of course, my game sense today is not impeccable, and I still Uber the enemy spy sometimes, hilariously enough. But thanks to my early Medic training, I’ve at least learned how to strafe around and never keep still, as staying in one place in this game can have dangerous consequences.

I Learned About Teamwork

Having the word “team” in Team Fortress 2 may lead you to believe that the game is all about teamwork, but in pubs, that’s hardly ever true. In public servers, you’re grouped with a bunch of random people fighting against another bunch of random people. It’s therefore understandable if no one ever uses the communication lines to speak with one another, and if most of the players just scatter about and do their own thing instead.

However, as a Medic, I’ve learned that I’m almost nearly defenseless without a teammate nearby. For my own survival, it was imperative that I was with somebody, even if it was a new player who didn’t even know where the next point was.

After all, I wasn’t a Soldier that could roam around as he pleases, nor was I a Spy that could go around looking for picks. I was a Medic, and that meant that I had to always be healing someone to build my Uber, and I couldn’t really build it alone – especially since I didn’t have an Ubersaw as a new player (and could probably not hit anyone even if I did).

It became important for me, therefore, to stick to my team and help them in what ways I knew how to, like overhealing them and telling them if there’s a sentry ahead.

Interestingly enough, I’ve also learned that if I try to be a helpful member of my team, my teammates are likely to respond in kind and actually work together with me and the rest to win the round. There have been times when someone steps up for a push when I’ve told my teammates that I have an Uber ready. I’ve also entertained requests for pocketing when I’ve seen that my team is pushing for the objective and that my pocket and I could probably keep the enemy team busy in the meantime.

Being a Medic has helped me appreciate the value of teamwork, and taught me that I can rely on random people on the Internet to win a game. It’s always nice to see a team rally together for an objective and win, especially if it happens in a public server.

I Learned That I Loved Playing As Medic

I’m by no means a newbie anymore, but I still continue to fight among the mercs of Teufort today. Thanks to playing early on as a healing merc, I’ve learned to love the game for all its quirkiness and randomness, despite experiencing challenges as a newbie. And so, even today, you will find me running around as a Medic, inwardly seething over the Scout that took away my health pack or deciding whether or not to Kritz the Gibus Demoman.

After all, I’ve learned most importantly that, after all those initial fumbling TF2 moments, I actually like playing as a Medic. I enjoy it when the player I’ve Ubered succeeds in destroying the sentry nest. I relish the thought of healing someone at just the right time to prevent them from dying. I really like it when my teammates take care of me in their own ways, like a Heavy offering me a sandvich or just hearing someone say “Thanks!” when my Medigun beam touches them.

I guess it’s just phlegmatic me enjoying the thought that I could help other people play the game, but I really do enjoy playing as a Medic. To be honest though, I’m not sure if I can call myself a Medic main at this point in time, but at least I have a class I can fall back to when I’ve decided that I want to be a tryhard for a round or two.

Well, I guess that’s it for me. I just heard that there’s a sentry nest that needs to be taken care of, and the new Medic on the team doesn’t know how to use his Medigun yet. I gotta run, but I’ll see you on the battlefield, ja? Just don’t spam E or I’ll shove my Ubersaw up your sorry ass so hard you’ll never want to call for a Medic again. Danke, Kamerad! Gesundheit!


– Published on The Daily SPUF –