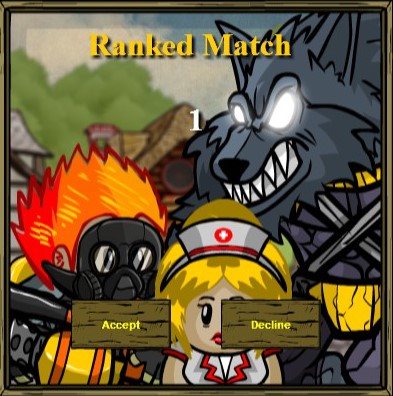 Enjoy the queue time while it lasts, boys. We’re going in.

So lately, I’ve relapsed into playing too many Town of Salem games again, and quickly bumped my 500 hours to 800 hours. However, I spent very few of the last 300 hours in All Any, where I played my first *few* games. I have instead delved into the wonderful world of Ranked.

A world where BGs refuse to protect revealed Mayors like Erlich here, since they do not wish to die for politics.

To be clear, 600 games isn’t actually a lot. I mean, the scoreboard shows that the players with the most Ranked games have around 5,000+ matches under their belt. Still, I’d like to believe that it gave me an adequate look into how the world of Ranked looks like for a newbie.

The Ranked Game Mode is a mode in the game that is the closest thing to competitive TOS, since it’s got an Elo rating system. In case you’re not aware,

… an Elo rating system is a method for calculating the relative skill levels of players in competitor-versus-competitor games such as chess. (from Wikipedia, retrieved 27 April 2017)

In TOS, your Elo will determine the skill level of the players you will face in a Ranked game. Everyone starts off with 1200. Each win adds Elo, while each loss makes you lose Elo. The amount of Elo you win or lose is actually dependent on the players you’re with, and the roles that are present for the game.

In a nutshell, Ranked is a place where TOS players can use their role and their wits to make their team win. Unlike other modes, this is a high stakes, high pressure environment, due to the presence of Elo. Ideally, everyone knows how every role works, and you’re paired with people who are at the same level as you are. 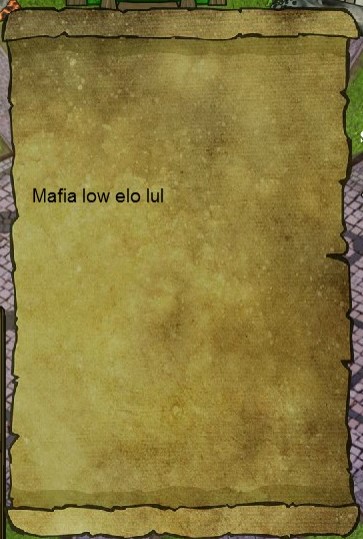 The players you’re with are mere reflections of yourself.
That, or all the good players are doing productive things with their lives, unlike you.

Now that’s the ideal setup, so how does it actually play?

Before you can play a Ranked match, you need to play at least 50 games in other modes and 10 games of Ranked Practice. After all, you need to have learned the basics before even stepping into competitive play, which is filled with experienced players who are expecting the best from their (supposed) teammates. 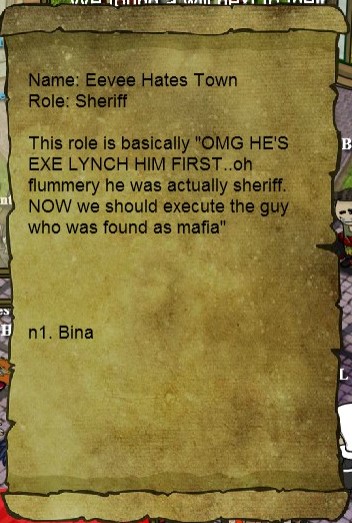 Uh, so, let’s get that other guy now.

Personally, I only stepped into Ranked after give or take 900 non-Ranked games, and let me tell you – it was a whirlwind for me. Ranked is nothing like the rest of the game modes, not even Ranked Practice.

I believe that the only real way for you to improve in Ranked is to actually BE in Ranked. This, for me, meant taking blows to my self-esteem with each match, since I felt pressured from the get go to improve. After all, my faction was counting on me to be competent, right? Everyone else’s Elo depended on my skill to counter my rivals’ claims.

Unless it’s the will of God. I can’t CC that flummery.

So if you’re thinking that playing tons of non-Ranked games will prep you for competitive play, yeah, no. Just grit your teeth and dive in. Trust me.

At this point, I’d like to say it gets better, but…

You’ll Get Reported For Stupidity

With Elo on the line, people are itching to win. They don’t care if you joined the Ranked queue for the first time and still figuring out how things go. If you’re not performing the way you’re “supposed” to be performing, expect people to report you for “gamethrowing.”

Gamethrowing: Several different definitions exist on the topic of gamethrowing. More often than not, the context of this rule violation relates to intentional gamethrowing. If a player intentionally reveals information that causes their alignment to lose a game, and if there is evidence that the player did it with malicious intent, then that is gamethrowing. (from the TOS Wikia, retrieved 6 June 2017, emphasis supplied)

So if you don’t know your way around Ranked and unintentionally revealed information that, well, made your faction lose, then too bad. You probably gamethrew without meaning to, but fast-typing *ahemSALTYahem* players probably filed a report for you already. 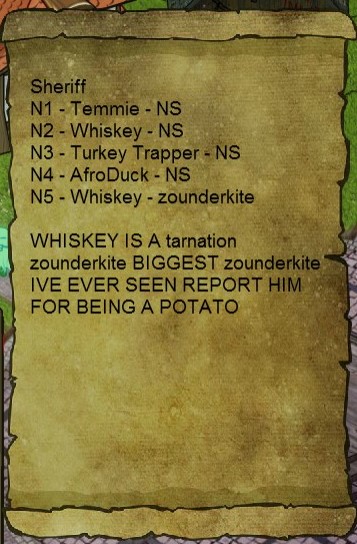 REPORT HIM FOR BEING A POTATO.

Because that’s just how Ranked is. A lot of people expect you to have played enough games to know how roles work. Thus, if you don’t play the game the ~meta~ way they expect you to, they instantly think that you’re probably gamethrowing.

But let me be honest here. I may have played 900+ matches in the other game modes, but I was still surprised by the quirks of each role I got in Ranked. (Like how Lookouts can see people visit themselves or how a Retributionist can check if the Townie they lynched that day is a Disguiser or not.) And that was just how the roles worked. How to use that knowledge to win a game is a totally different matter altogether. 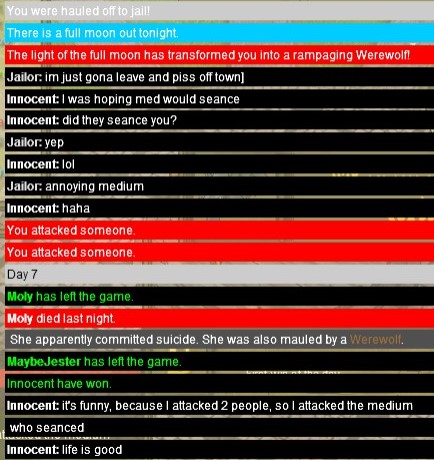 Did you know that, as Werewolf, you could also attack the dead medium that seances your target at night?
(Also, in this game, just me the WW and Moly the exe-less Jailor were left. Life is good.)

However, these are things you probably only learn after playing (and losing) many, many Ranked matches. Until then, keep your head up, listen to the conversations going on, and queue again.

(By the way, if you leave early, you could be reported too, especially if you left Day 1. It is rumored to be common practice for Elo farmers to leave ASAP if they don’t get a Town role, and an absent role usually messes things up for the different alignments. So be wary of that.)

One of the first things I observed about Ranked games was that the chat can go by pretty fast – and you will have no idea what’s happening. Even Day chat can be unreadable, thanks to all the abbreviations seasoned Ranked players use.

I spent a lot of time in All Any before, and while people tend to be chatty there, they’re usually just random chats about random things. (Latest GoT trailer, anyone? Hey, I like Doctor Who too! Pirate theme FTW, make all non-pirates walk the plank!) In Ranked, however, each and every word you say (and don’t say) will be scrutinized. If you try to ask a question about the game or even what certain terminologies mean, you’ll be automatically labeled as scum and find yourself hung, executed, or shot by a vigilante that night. 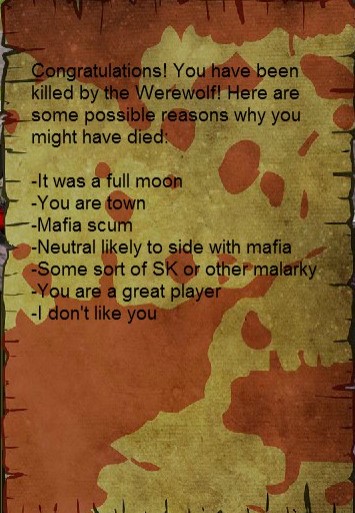 Or killed by a Werewolf that doesn’t like you.

Even your voting pattern will be analyzed. Why did you not vote the obvious Godfather up for trial? Why did you choose to vote innocent on the Werewolf? Why did you start the vote on the Jailor claim?

Oh, and don’t get me started on the tactic that most TOS players love to hate: voting for roles or VFR. For no reason at all, you can be voted up, just so the Town can figure out who’s who based on your claim. If you’re not ready with a role and will when you are, chances are high that you will be lynched ASAP. (For the record, I hate VFR because it just kills the fun for me. Give me bad clues and deception or give me death.) 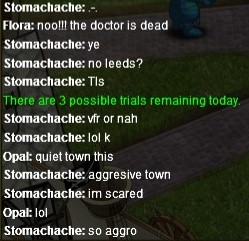 Passive towns always lose, so might as well go aggro.

The Ranked environment takes some getting used to, but just keep playing, read the Wikia from time to time, and check out a guide or two or three. You’ll be eased into it after a few hundred games or so, don’t worry. 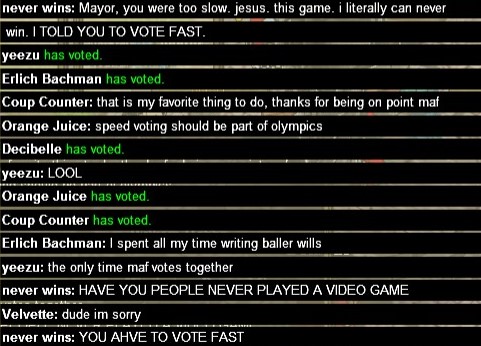 Don’t forget to practice your speed voting skills, too. They may save your life someday.

If there’s something I really, really enjoy about Ranked, it’s the fact that you’ll never know what people will claim or how people will play the game.

I’ll be the first to admit that I’m not very good at deception at this game, and I dread getting an evil role (unless it’s Neutral Evil/NE). Nevertheless, I do enjoy seeing people make really weird claims and end up being a role that the Town did not expect them to be.

As so, it’s great to see different players stretch their words, their claims, and their wills to get someone killed, lynched, or executed. I am constantly in awe of clever Townies and Mafia members, especially those who are great at scumreading – and at manipulating good scumreaders to create havoc.

This, for me, is what Ranked’s all about. Ranked is populated by a somewhat more intelligent player pool, and I appreciate that. I can battle wits with smarter players and, best of all, learn from them as I attempt to git gud at this text-based roleplaying game.

These are just a few of my first impressions of Ranked, and definitely do not cover the entire Ranked experience. There are more than a few intricacies to Ranked mode that I have not tackled here, but may discuss in another article. (Perhaps with some insights into The Coven update, yes?)

Ranked may sound daunting, and I’ll admit: I was really nervous for the first 50 or so Ranked games I played. As I said in that other TF2 article, I am a rather phlegmatic person, so I have a tendency to care a lot about my fellow Townies and/or conspirators. As so, I felt pressured to do my best.

Happily enough, sometimes the Mafia has a tendency to care about Spies, too.

However, it’s a really fun mode that sharpens your wits and introduces you to like-minded players. It’s a fun way to play Town of Salem, and a way to really get into the lore of the game and discover the different nuances of all 33 roles they currently have out.

So come along and queue up. We’ve got Elo farming to do.

What were your perceptions of TOS’s Ranked mode? If you haven’t played it, why haven’t you? If you do, what have I missed? Let me know in the comments below!

Disclaimer: Most of the stuff I have written here were based on my experiences in Legacy Ranked, which is more or less the state of things before The Coven update. There have been (and will be) changes to the roles and the actual gameplay, so take a few of things I’ve said here with a grain of salt.

5 thoughts on “The Ranked Experience: What I Learned After Playing 600 Ranked Matches On Town of Salem”