I’ve finally done it. It only took nearly one year, hundreds of sandviches, thousands of Ubers, and millions of kills deaths.

Yep, I can finally boast to the world that I’ve happily wasted spent 1,000 hours of my time on a single game. I now have a good 1,000 recorded hours on old Team Fortress 2, one of the goofiest, decade-old massively multiplayer online FPS games out there.

1,000 hours of making best friends and worst enemies in just a span of 5 to 20 minutes. 1,000 hours of sharing sandviches with enemies while earning your own team’s ire. 1,000 hours of crying over pubstompers, hackers, and griefers who are out to wreck your fun in pubs Casual Mode servers.

Yes, it’s been a wonderful 1,000 hours of me spending time in this crazy game, and in the true spirit of celebration, I’m here to tell you, just like I did at 500 hours, what I’ve learned after 1,000 hours of playing Team Fortress 2.

Looking back, I believe that I have come a long way from being the ragequitting Heavy newbie I started as so long ago. After all, with 1,000 hours comes experience, slightly better game sense, and a veteran’s view into what a good team composition would be.

If you’ve managed to stick around for this long, it also means that you’ve probably managed to learn what mistakes most newbies make, and have a couple of ideas on how to get by them.

Oh, I don’t mean window sniping or going the wrong way in the map. (Although those are part, too.) I mean the smaller, finer tricks of the trade, like surfing blast damage to get out of danger, knowing when to exit a bad situation when needed, or the right way to end a Rock, Paper, Scissors match. (If you don’t know how, you really need to spend more time in pubs community servers or Casual Mode.)

Add to this the fact that each class also has its own traits and skills to learn, which you only get to find out if you play the class more, and as you encounter other players who main that class. This not only includes which weapons are known to be the best for a certain scenario, but also class-specific knowledge, like Wrangler jumping, when to stab-and-sap, Vaccinator cycling, and hitting sick airshots.

In truth, this is probably why I, and many other Teufort mercs, think that newbie free-to-plays are just adorable. As they are unarmed with basic TF2 game sense and know-how, it can be entertaining to see them play the game with unorthodox methods and a fresh pair of eyes. Kind of like how we all started out in the game, I believe.

Unless your team is full of them…. Then no. Heck no.

… Yet You’re Still A Scrub

And so, here I am, a quite competent player who has garnered some praise despite my preference for fashioning myself with only the most common items in the game. After all, I have spent nearly 300 hours on support classes alone, so I sure know how to give my team a boost when they need it. I can totally rock that Medigun and place my Dispensers strategically!

… However, I suck at almost everything else.

To be honest, I haven’t even gotten all the achievement items for all classes yet. I also have terrible aim, and have only really started training to get better with hitscan weapons thanks to getting slapped in the face by my horrible kill-death ratio on the Casual Mode screen.

So, the funny thing is, even though I’ve spent 1,000 hours in this game, I feel that I am, in many ways, still a pathetic scrub. While I can rock my Med socks in the battlefield, I for sure will not be able to kill one just yet. Right now, I don’t know even how to manage my cloak meter as a Spy, nor can I efficiently rocket jump as a Soldier.

That being said, it can be humbling to see just how much I can still improve on my TF2 game play, despite having spent 1,000 hours in it.

Your Mettle Gets Tested (Spoiler: It can make or and break you)

I’ve played a few MMOs before with friends, and found that it was usually a cakewalk to get into the game. After all, most would have a nifty tutorial that will explain how things go as you move along.

Okay, so TF2 DOES have these basic tutorials for you to get started with. However, in truth, they give you very little idea in terms of what you’re actually supposed to expect once you get into a random map. Sure, you’re taught how to build a Sentry or use your Invis Watch, but it can be really difficult to apply that knowledge in-game.

After all, you’re brought into the big, bad world of Teufort, where you’re made to fight against people who’ve been playing the game since it first came out. And they won’t show you mercy just because you’re new. As a matter of fact, they might just let you see in your death cam how they laugh at your gibbed corpse. (… Oh, wait.)

So if there’s anything I can thank TF2 for, it’s how it really toughened me up, especially since I progressed through my 1,000 hours mostly by myself, without friends or clans to back me up. That meant 1,000 hours of taking in poor insults, getting taunted at after every kill, dealing with my uncoordinated team, and just trying to survive while getting repeatedly rekt by my nemesis (or three).

Safe to say, if I did not have the mettle to acknowledge that I had to suck first before getting passably adept at something like a silly game called Team Fortress 2, I’d probably have ended up not even touching the game again.

But, thankfully, I got over myself and concentrated on getting gud, so here I am now with 1,000 hours to my name, while looking forward to enjoying many more hours in it and making new friends in the process.

You Discover The TF2 Community

I’ve always been fascinated by how people congregate to go gaga over one particular thing, most especially when it involves video games. This is no different with how I felt when I stumbled across TF2’s community, one I have quietly contributed lurked in since then.

What struck me in particular about the community of this old FPS is the fact that it still gets a lot of love from players who spend hours on it. Even today, many people have been hard at work developing all sorts of cool stuff for the game, from maps to cosmetics to blog posts to YouTube videos to competitive matches to trading spreadsheets to community servers to all kinds of wacky things.

I mean, just look at all the content you can browse through the workshop, all the creativity celebrated in events like The Summer 72-hour TF2Jam, and the cool TF2 SFM & GMod videos people create! The love for Team Fortress 2 is something that runs deep among its mercenaries, and it probably won’t go away despite the presence of shiny new competitors to the game.

Lots of people still bring attention to the game too, whether to write about it, comment about it, stream it on Twitch, or discuss it in the form of entertaining videos. “TF2bers” is the term for TF2 players who upload clips to YouTube about the game, and there has been a rise of popular personalities who have spoken for (and poked fun at) the game they have long enjoyed. (A big list of them can be found right here.)

So yes, this community is still a thriving one, and while many players have come and gone, it’s still one that’s going strong, and still a vocal one. One particular instance they raised their voice was when clamor from the community made the TF2 team do some quick changes to their Meet Your Match update. The game may be old, but the love it gets from its fanbase will probably let it thrive for a little while longer.

And since we’re on the subject of updates…

I may not have been an active player when the game first came out in 2007, but I have no doubt that TF2 has changed its face since then. It has had nearly 500+ updates, and each of them has changed the way players move around in the different maps out there. (This informative article expounds on that point more.)

For example, one big update that changed its face forever was the Uber Update in 2011, since it made the game, formerly priced at $20, free for everyone to play. And, of course, there’s the 2016 Meet Your Match Update that a lot of veteran players have been keen about, since it officially introduced competitive matchmaking to everybody in the community.

Since I’ve been sitting in my cushiony chair for 1,000 hours on this game, I’ve seen how each update tends to bring an interesting difference to the game, which can be sometimes bad and sometimes good. Each nerf and buff changes not only my play style, but also that of thousands of players. It’s not unheard of to hear people cry over weapon or class tweaks (like in the 2015 Gun Mettle Update, which brought a lot of those), with some even claiming to quit the game over these changes.

But hey, all those updates, though now far and few between, probably mean that the developers still have some interest in keeping TF2 alive. That’s welcome news to me, since I surely wouldn’t want my 1,000 hours to go to waste on an unupdated game.

So bring on the next update, Valve. My body is hats are ready.

At the time of writing, I have already gone past the 1,000 hour mark. I guess that means that my devotion to Team Fortress 2 is one that isn’t going away for some time, despite its many flaws. There’s just something addicting about its cartoony graphics, plus fighting with and against other loony people that continue to play this game (though it is quite past expiration date) is still extremely fun.

What about you? What have you learned in your first hundred/thousand hours in TF2? Let me know in the comments below!

Well, you’ll definitely be seeing me in the TF2 servers for a while more, probably working my way to another 1,000 hours. Thanks for reading, and see you around!

PS: With the publishing of this article, I have now also written more than 10,000 words on TF2 alone. Here’s for more to come!

PPS: I changed the featured image for this blog/article, but here’s the original one (which I used as a desktop background for a good while). I’d love to credit the artist, but I don’t quite know who made this awesome black-and-white Vintage Fortress 2 image. If you happen to know who made it, do let me know so I can credit them here! 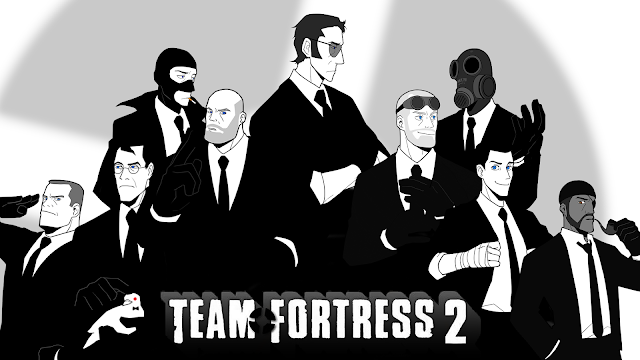